Natural Cork, Plastic or Aluminum Screw Caps – Which is Best?

Since the winery's founding in 1983, Founder Jim Bernau has made stewardship of the land a key principle in our winemaking and farming practices. As a native Oregonian, the importance of sustainable farming practices is integrally woven into Willamette Valley Vineyard’s mission. That’s why we insist on using natural cork enclosers in all our wines and why our winery was the first in the world to use cork certified through the Rainforest Alliance to Forest Stewardship Council® standards. 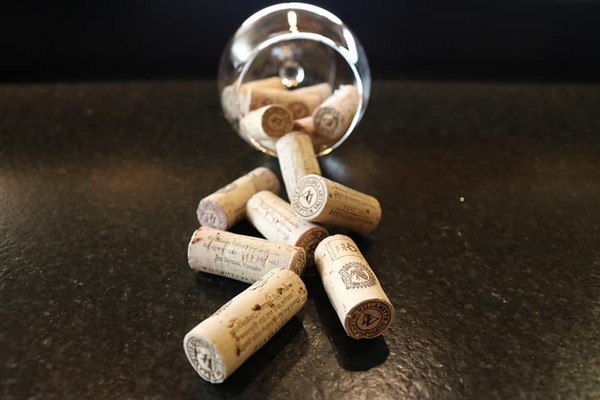 What makes natural cork more sustainable than a plastic or aluminum screw cap? The millions of acres of cork tree forests pull carbon from the air and pump out oxygen, helping to offset our carbon footprint.  The bark from just one tree can be harvested several times over the years, meaning the tree is never cut down but continues to sequester carbon throughout its long life.

What about the wine itself – does the enclosure really matter? Simply put, yes. While there are a multitude of factors, natural cork seals in the bottle quicker than plastic or aluminum screw caps. That means natural cork provides an aging advantage and significantly reduces the chance of anerobic, off-aromas developing in the wine. 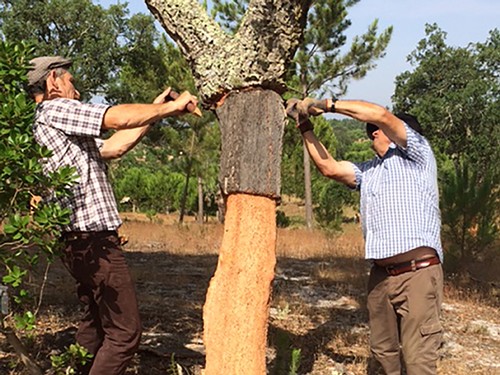 {Winemaker Joe Ibrahim visits cork forests in Portugal and helps to gently peel the bark from the tree trunk.}

Not only are these trees losing their financial caretakers, but many species, like the now endangered Iberian Lynx, are now losing their homes.

Why don’t all wine producers use natural cork? A big factor is price. High quality natural corks are double the price of plastic or aluminum alternatives. We have long put an emphasis on choosing what is right for the environment, as well as our consumer. 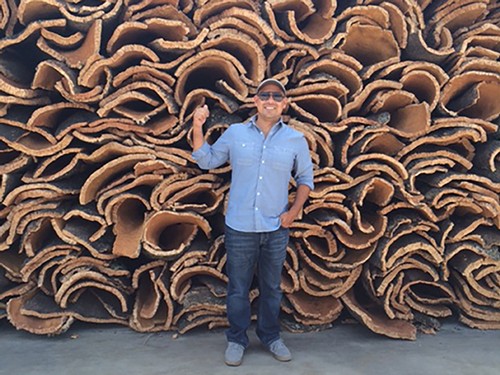 Winemaker Joe Ibrahim on a visit to a cork tree farm in Portugal.

Want to learn more about natural cork? Willamette Valley Vineyards created the Cork ReHarvest natural cork recycling program. This program was responsible for placing receptacles in all Whole Foods nationwide and other select retailers to collect cork and turn them into products like shoe footbeds, insulation and more!

Patrick Spencer, the past Sustainability Coordinator for Willamette Valley Vineyards, helped turned this program into the Cork Forest Conservation Alliance (CFCA) in 2008. You can watch his Ted Talk here.

Celebrating 41 Harvests and The First Crop from Loeza Vineyard 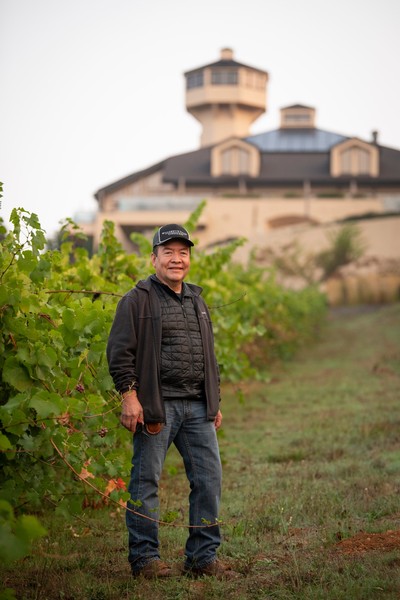 It is hard to imagine, but Efren Loeza has been in the vineyard longer than the winery’s Founder, Jim Bernau. Efren came by this unique distinction through Willamette Valley Vineyards’ merger with Tualatin Estate Vineyard in 1997.

Efren began at Tualatin Estate Vineyard in 1979 at the age of 17 and has worked in the vineyard ever since. Even more surprising, the person who taught Efren his first lessons in vine care, Jose Ortiz, is still working at Tualatin Estate. Jose learned his skills from pioneering viticulturist, the late David Foster.

Efren came to Oregon from Michoacán, Mexico with his father Marcos, uncle Juan and three friends when he was 16 years old. He worked on a strawberry farm during the day, an onion warehouse at night and worked seasonally with blueberries and cucumbers, too. They all lived in the same cabin on the farm and at night they entertained themselves by listening to the radio and playing cards or dominoes. On Friday nights the cabins would all get together and have potlucks.

Efren has 11 brothers who all ended up coming to the United States to work and two sisters who went to California. His brother Miguel is now in his 30th year as the Foreman at Tualatin Estate Vineyards.

Originally hired by Foster to work at Tualatin Estate Vineyard, he told Efren “if you do good work, you could work here for 20-30 years.” He also told Efren “you ask too many questions, but because you do, you will run this place someday.” Efren worked with Foster for 14 years and is very proud to follow in his footsteps managing the vineyards.

When asked about his favorite memory of working at the winery Efren said it was when Founder Jim Bernau showed up at Tualatin Estate and asked him his name and if he liked working there. Jim told him he wanted to keep people who loved working there, like him. In 1997, Willamette Valley Vineyards merged with Tualatin Estate and true to his word, Jim kept Efren and the staff. 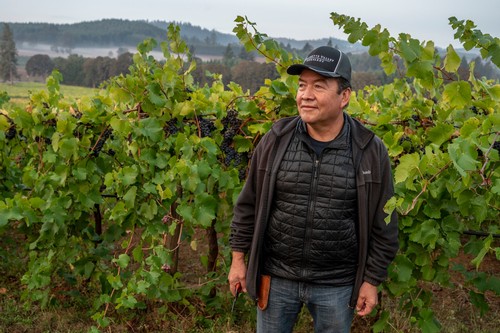 His least favorite thing to do is “dropping the fruit” from the vines. It makes him sad to have a vine with 35-40 clusters on it and cut half of the fruit that is lagging in ripeness or size. The process of thinning out the grape clusters is called green harvesting — removing the fruit that it still green when the rest of the fruit has turned color. This allows the vine to put its energy into a smaller crop of the remaining fruit is healthier, resulting in more flavor and concentration. Each vineyard and grape varietal has different amounts of fruit that has to be dropped depending on the winemaker’s preference and varietal being grown.

During harvest Efren sometimes doesn’t sleep well as he worries about the vines and the grapes. “If the weather app shows a week of sunshine, I can sleep that week. If it is a week of rain, I don’t sleep so well,” says Efren.

As Vineyard Manager for all of our vines from Tualatin Estate in Forest Grove to the Estate Vineyard in Turner, Efren has more than 500 acres under his supervision.

When asked about some of his proudest moments working at the winery he lists winning the Oregon Wine Board’s first Vineyard Excellence Award in 2016 and being recognized as Employee of the Year by his fellow employees. He’s also proud of designing many of our vineyards including the row design, trellis and vine layout — something a lot of vineyards have to hire outside consultants to do. He is very devoted to the land — Efren’s careful vineyard practices and stewardship of the land have earned LIVE and Salmon-Safe certifications for all of our estate vineyards.

In honor of Efren’s contributions to the winery and the Oregon wine industry, we planted Loeza Vineyard in his family’s name in 2015. The 39-acre vineyard is located in Gaston and is planted with Pinot Gris and Pinot Noir. In 2020, we harvested the first crop from Loeza Vineyard for our estate wines.