We now own the lot where the store's building — nicknamed "the Old Cabin Tavern" owing to an interior constructed of hand-hewn timber — served as a general store, a hotel and Carlton’s first bank, with a parlor and speakeasy supper club in the basement. Built in 1904, it was destroyed in a fire on April 18, 1995.

This release heralds the beginning of our efforts to rebuild the Carlton property with a brick-clad micro-winery and distillery with food service, rising in the lost structure's place. We plan to continue making additional small batches to be released in limited amounts and featured in our Tasting Room & Restaurants where permissible.

Please complete the form below and be among the first to know when the next batch of this inaugural spirit will be available for purchase. 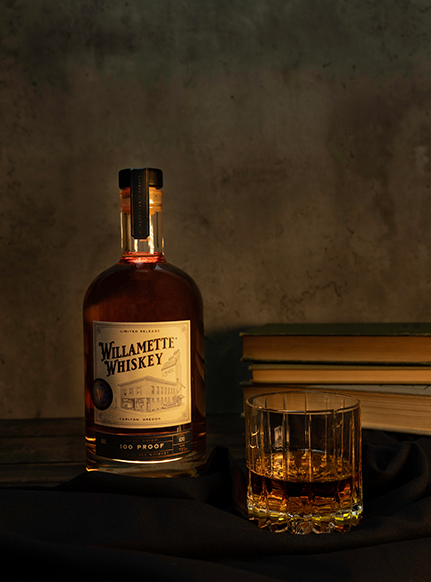 This handcrafted, small-batch rye whiskey was aged in new American oak for six years, then blended down to a bottle strength of 100 proof.
Founded in 1983 by Oregon native Jim Bernau with the dream of creating world-class Pinot Noir,
Willamette Valley Vineyards has grown from a bold idea into one of the region’s leading wineries, earning the title “One of America’s Great Pinot Noir Producers” from Wine Enthusiast Magazine.